Basic Concept
Fully embracing its responsibility as an exemplar corporate citizen to contribute to society, OUTSOURCING Inc. (hereinafter, the "Company") established the “Corporate Principles.” The Company thus recognizes that, in an effort to achieve growth and enhance corporate value over the medium to long term in a constantly changing business environment, management must assign the utmost priority to creating a fully autonomous, highly ethical corporate governance system that is closely monitored and routinely reviewed. The Company also recognizes that such a system will prove invaluable in the ongoing building of trust and confidence with all its stakeholders, including shareholders, clients, local communities and employees.

Towards this end, the Company has disclosed the frameworks of its corporate governance system in its "Corporate Governance Guidelines," and will continue to enhance and fortify this system through various initiatives going forward.

A. Outline and Rationale for the System

In order to further enhance the auditing and oversight functions of the Board of Directors and directors, having been granted approval at the ordinary general meeting of shareholders held on March 25, 2016, the Company made a transition from being a company with a Board of Company Auditors to a company with an Audit and Supervisory Committee.

With this transition to an Audit and Supervisory Committee company, the Company aims to further strengthen the supervisory function of the Board of Directors, secure impartiality and transparency of management and raise overall efficiency.

As of March 28, 2019, the Company's Board of Directors consists of nine directors, including four outside directors, who convene once a month to examine, evaluate and decide on matters stipulated under the laws and regulations of Japan as well as important management issues. Board directors are also responsible for examining the policies and plans, as well as the status of the policies and plans being executed, with regards to management and corporate operations. The Board may also meet at any time it deems necessary.

Regarding the four outside directors who carry out objective and neutral oversight functions from an independent perspective, they are independent external directors who meet the requirements for independent directors as defined by and registered under the Tokyo Stock Exchange.

This Committee consists of four directors, including three outside directors, who, as members of the Audit and Supervisory Committee, determine the Committee's audit policies, annual audit schedule and other related matters in addition to monitoring the status of the directors' execution of responsibility and preparing reports relevant to this task. The Committee also determines agendas regarding elections, dismissals and refusals of reappointment of accounting auditors proposed to the general meeting of shareholders, and complies with the laws and regulations of Japan, the articles of incorporation and the Audit and Supervisory Committee rules. By convening Audit and Supervisory Committee meetings both routinely and as necessary, the Committee shares information among its members and confirms the progress of its audit plans by examining important issues to be discussed, reporting audit contents, exchanging opinions and so forth.

In an effort to enhance overall coordination, the Audit and Supervisory Committee exchanges information timely with the Group’s Internal Audit Office as well as the accounting auditors. The Committee works closely with the Head of Business Management, which is in charge of the Groups’ internal control, as well as with the General Affairs, Legal and General Accounting Departments, to improve the efficacy of the auditing process.

The chart below visualizes the above-mentioned system: 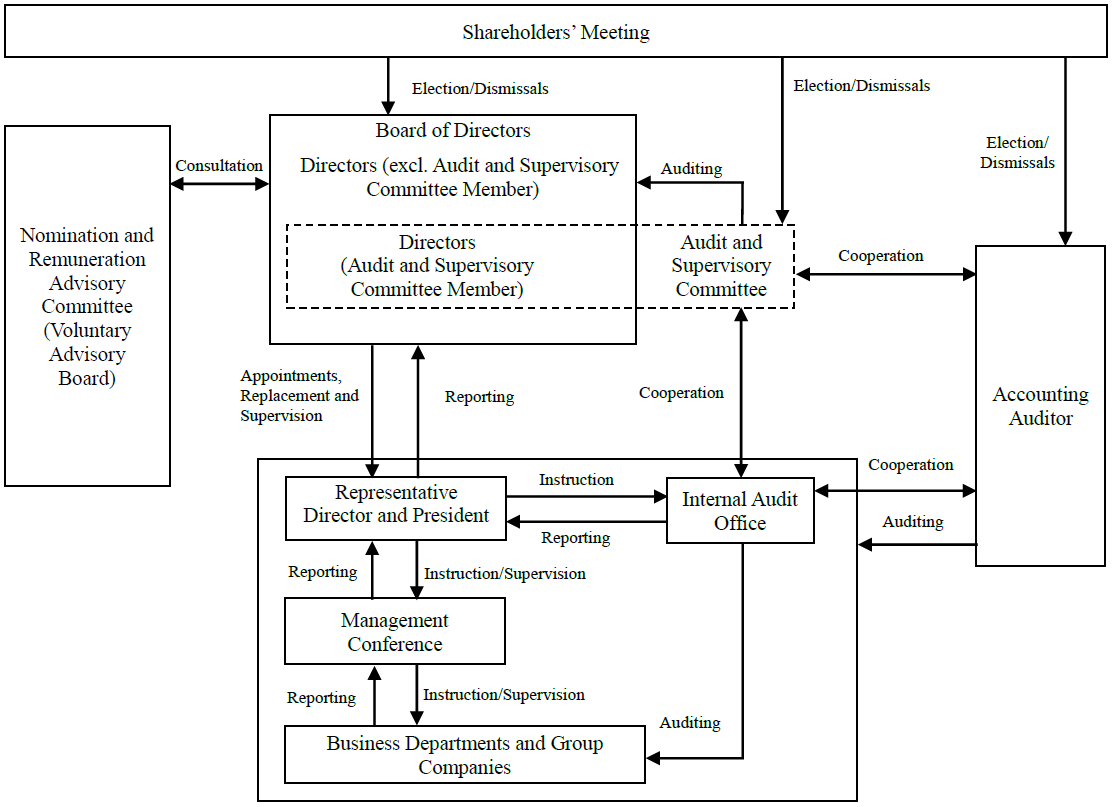 B. Status of Internal Control System

During the Board of Directors meetings, the Company resolves and enforces its "Basic Policy on Establishment of Internal Control Systems," which is based on the laws and regulations. Based on this basic policy, the directors are responsible for the overall management of internal control, and the various department heads are tasked with the management and promotion of internal control in their respective departments on an operational level. Internal control is reinforced on a Group-wide basis through the routinely held Management Conference—which the inside directors, managing officers and each Group company’s representative director attend—whenever a Group issue concerning management is placed on the conference agenda. In addition, at the conference, the Group’s management policies are communicated, progress reports on business activities are given and important matters pertaining to corporate operations and issues requiring discussion are reported.

The Company also established the Internal Audit Office, which is independent of the Group’s business units and reports directly to the President. Based on the Company’s internal audit program, the Internal Audit Office not only audits the operations of each department and subsidiary, but it also monitors the internal administrative system. Furthermore, the Office conducts inspections to ensure that the Group remains in compliance with the various laws and internal regulations, as well as examining the status of the Group’s risk management program. Findings from the audited departments are reported to the President and the directors. Such findings form the basis of a written recommendation that features specific solutions for the audited department, thus delivering a more efficient and effective means for business operations improvements.

The Head of Business Management is tasked with the overall authority over the risk management of the Company and its subsidiaries, while the General Affairs Department is engaged in the direct administration, operations and regulations relevant to the program. Meanwhile, the Legal Department oversees the legal dimensions, not only developing legal responses but also communicating the latest government regulations to the entire Group, coordinating risk management with internal control.

In case of a crisis, an Emergency Task Force will be set up and headed by the President. A special communications team will also be organized, as will an external advisory team that includes the Company’s legal counsel. The aim of this system is to make a rapid response and prevent losses or damages from spreading to minimize their effects.

In order to safeguard the personal data of the Group’s employees, the Company has established the "Personal Information Protection Guidelines" to ensure that the management of such sensitive information is thorough and irreproachable. Specifically, this means special attention is paid to the appropriate handling of personal data acquired during the hiring process of an employee from even before he or she is hired, and that this data – including a person’s resume and other important documentation – will be kept or deleted based solely on the decision of that person.

As for the risk management of corporate information, the Company has established the "Information System Management Regulations," with its Information Technology Department designated to serve as the primary administrator for establishing a safe, secure and efficient operating environment. This system specifically includes physical, technical and human security programs.

The Company oversees and monitors the status of director and employee work execution at its Group companies in order to ensure that subsidiaries and affiliates are operating properly. It defines the Code of Conduct as the guideline and action plan to govern all Group companies and requires directors, auditors and employees at the said companies to strictly adhere to the guideline. In compliance with the management rules for subsidiaries and affiliates which define the requirements relevant to and inclusive of chain of command, authorities, decision-making and other organization-related matters, the Group also requires the entirety of a stipulated item that affects management to be subject to approval by the Boards of Directors, Management Conference or the officers in charge, as appropriate.

Furthermore, by receiving business status reports from every Group company at least once a month, such as from the officers in charge upon their attending the board of directors meetings of each subsidiary, the Company’s Board of Directors can examine and review the status and details of the collected information. At the Management Conference, issues defined by the management rules for subsidiaries and affiliates are discussed, and the Group Management Conference consisting of full-time directors, managing officers and each Group company’s representative director is convened as necessary in cases in which further details on business conditions need to be examined. As such, the Group engages in intra-Group information sharing and communication facilitation as well as standardization of management policies.